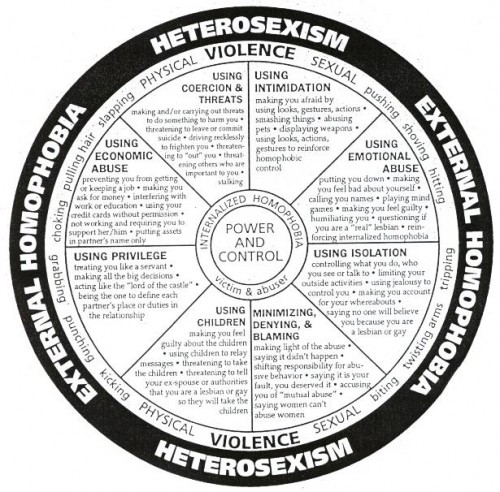 The blogosphere has been abuzz with perspectives (like this one from Yolo Akili) on domestic violence the past few weeks, thanks to Rihanna and Chris Brown’s appearances/awards at The Grammys as well as their newly-released remix collaborations.

I’m still marinating on what it all means for the public discourse on domestic violence, but one thing is clear from the blog comments, tweets, and diversity of reactions – we could all use some educating. Since most of the commentary focuses on violent acts committed by men against women, I asked local advocate Adrienne Graf a few questions about intimate partner violence in relation to the LGBTQ community.

For some personal perspectives on intimate partner violence, check out the profiles of queer survivors in the February issue of PQ Monthly.

PQ Monthly: Tell us a little bit about your background with intimate partner violence.

Adrienne Graf: I got involved in domestic and sexual violence advocacy in queer, anarchist and punk communities in the early 2000s. I was a part of various short lived and feminist collectives that addressed sexual violence and sexism as well as domestic violence.  My eyes were really opened to the prevalence of queer domestic violence around this time, observing survivors not getting support in my community and abusive behavior and people continued to get supported and praised. It lit a fire inside of me that said, “I want to talk about this in real ways. I want to support people in my community who are experiencing this.”

I have been working as a campus-based IPV advocate for the past four years at Portland State University. I have been trained by the Attorney General’s Sexual Assault Task force, The NW Network of LGBTQ Survivors, and Portland Women’s Crisis Line for over 90 hours of advocacy specific education. I received my Masters in Social Work in June of 2010 and spent my first year practicum at Portland Women’s Crisis Line working in the Sex Industry Outreach Program and on the crisis line itself. I currently work full time at PSU assisting students in safety planning, reporting to the police, campus security or the campus conduct committee, filing restraining orders, accessing legal services, accessing housing, and  providing support during sexual assault forensic exams. I facilitate a healthy relationships support group that is open to students of all genders and sexualities every term. Soon, hopefully, I will be providing drop-in advocacy hours at the Queer Resource Center on campus.

PQ: What does intimate partner violence look like in LGBTQ relationships? Are there any good statistic on its prevalence?

[Note: Though Graf didn’t speak to prevalence, the National Coalition of Anti-Violence Programs says that solid statistics are hard to come by due to a lack of research. As a result, many advocates take the perspective that domestic violence occurs in LGBTQ relationships at a similar rate to heterosexual relationships (about 1 in 3). Still, the few studies that have been done paint a very serious picture. The NCAVP reports:

“The most recent significant study, released in 2002, indicated that gay and bisexual men experience abuse in intimate partner relationships at a rate of 2 in 5, one comparable to that of DV experienced by heterosexual women (see notes 1&2).  Island and Letellier describe it as “the third most severe health problem facing gay men today,” behind HIV/AIDS and substance abuse(see note 3).  Among lesbians, a 1985 study by Gwat-Yong Lie and Sabrina Gentlewarrier reported that slightly more than half of 1,109 respondents had been abused by a woman partner in their lifetime (see note 4).  Several smaller studies seem to support this finding.  Coleman’s 1990 study of 90 lesbians, for example, reported that 46.6% had experienced repeated acts of violence, and Ristock’s 1994 survey of 113 lesbians reported that 41% been abused in at least one relationship with another woman.

Studies of other populations in the LGBT community have documented even higher rates of abuse over respondents’ lifetimes.  The Portland, OR based Survivor Project’s 1998 Gender, Violence, and Resource Access Survey of transgender and intersex (see note 6) individuals found that 50% of respondents had been raped or assaulted by a romantic partner, though only 62% of these individuals (31% of the total) identified themselves as survivors of domestic violence when asked (see note 7).”]

PQ: What are the biggest misconceptions you’ve encountered around intimate partner violence in the LGBTQ community?

Graf: I think the biggest misconception is that abuse does not happen in LGBTQ communities, or that “so and so couldn’t be abusive, they are such a radical queer!” I have experienced a lot of silence around talking about abusive people in our various queer communities. I think a lot of this has to do with internalized sexism, homophobia, and a whole lot of other internalized oppressions. I think that some of this minimizing on the part of community members can come from a place of trying to protect and control the perception of the community. We are so often told our genders, sexualities, lifestyles, bodies and identities are perverse and wrong that many of us have internalized these messages and fought so hard to be a part of queer community. I think that a lot of denial around violence can often come from not wanting to confront our communities and ourselves.

PQ: What resources are available to help LGBTQ folks who are currently experiencing intimate partner violence or dealing with the repercussions of past abuse?

Graf: Bradley Angle has a great LGBTQ survivor program. I have been facilitating the Bradley-Angle LGBTQ domestic violence support group (as a second side job) for a year and half now, and I am so appreciative that the group and the program are around for queer survivors. Bradley-Angle also has a LGBTQ Healthy Relationships Group, which has been really successful so far. Both of these groups are free for participants. They also provide advocacy services as well, and their domestic violence shelter is open to survivors of all genders.

If the person seeking resources is a student at PSU, please come to the Women’s Resource Center! Despite our name, we serve survivors of all genders, and I really want to make this space comfortable for the students that we serve. Students can expect to experience LGBTQ-informed and knowledgeable advocacy from a queer advocate!

Graf: I really wish I knew. Someone please get the answer to this question back to me because I really really am invested in creating a space in my community to hold abusive people accountable. I am talking with some members of my particular queer community about a possible town hall discussion type meeting about domestic violence in queer communities, and I think one of the big desires I bring to that meeting is to work on an answer to this very question!

PQ: For those who choose not to take advantage of support groups or other established services, what kinds of self-care can be helpful? Are there any books/websites/other resources you would recommend?

Graf: I really believe that acupuncture can be a helpful tool for trauma recovery. I recently just had a similar interview/conversation with my therapist, Allison Carr, about resources for survivors and how acupuncture can support survivors experiencing longterm effects of trauma exposure. Another great queer acupuncture practitioner in the community that I am aware of is Kristin Dilley at Nightingale Acupuncture and Apothecary. Again, I think that many different acupuncture practitioners would be great, I just happen to know these two personally and know that they are skilled at working with trauma.

I think any sort of self care that leaves someone feeling safe is good self care. This could be different for everyone. Maybe for someone it is walking their dog, taking a bath, or reading a book. If you are currently experiencing a trigger, taking deep breaths and practicing a grounding exercise can be helpful. Do to the wonder of the internet, you can now Google various grounding techniques and get tutorials on the internet or stream a podcast of a guided mediation.

Self care might mean establishing boundaries in your communities, with your friends, and with yourself and not apologizing for that. It might look like spending more time with supportive people and creating boundaries with people that don’t have your best interests in mind.

PQ: How can we be strong allies to queer survivors (and survivors of all kinds)?

Graf: Listen to someone when they tell you they are experiencing violence. Listen, even if it is uncomfortable, even if the person they are telling you is hurting them is someone you cannot imagine would ever be abusive. Just because that is not your experience does not mean that it isn’t true, and often, abusive people are charismatic, well-liked and hold positions of power and popularity in social groups. This can be a part of an abusive dynamic, and something that really silences survivors.

Another way we can be allies to survivors is to interrupt victim blaming in ourselves and others. We are constantly getting victim-blaming rhetoric shoved in our face –  turn on any TV, movie, or tune into any conversation on the bus. It is important that we are vigilant about interrupting this and talking about it. I cannot stress it enough! I also think we need to think about the concept of beloved community. I think the most loving thing we can do for our friends is to have conversations when we see them exhibiting behaviors that make us feel concerned or alarmed. It should not always be up to the survivor to name abusive behavior. If we see it in the people we care about, it is an act of love to tell them that the way they are behaving is not okay.

PQ: How do we go about creating a culture of accountability around intimate partner violence in the LGBTQ community?

Graf: As I mentioned, I have been on the survivor support end of this work, so I don’t have any quick answers for this question, although I could probably tell you a lot of accountability attempts that have NOT worked. That being said, I am really invested in figuring this out with other people, so I hope someone out there has some answers. Also, I think what I was saying before about interrupting victim-blaming, supporting survivors, holding uncomfortable truths, and having loving and honest conversations about behavior can be a start towards accountability.

PQ: Is there anything else you think folks should know about IPV in the LGBTQ community?

Graf: Survivors and abusers are all around you. Some abusers are survivors themselves. I don’t say this to be scary or dramatic, but the level of denial that many LGBTQ survivors experience from their friends, communities, and social circles is not working in our favor. In order to address IPV in our communities, we need to be able to see it. We need to take a deep breath before going forward. We don’t have any models in mainstream society for IPV accountability; like so many struggles before us we are creating what we need without much guidance. We need to check in with our intentions. We need to support LGBTQ survivors because they are our best friends, our partners, our roommates, our coworkers, ourselves.

One thought on “Understanding LGBTQ Domestic Violence: An Interview with Advocate Adrienne Graf”